I was there the day democracy survived. 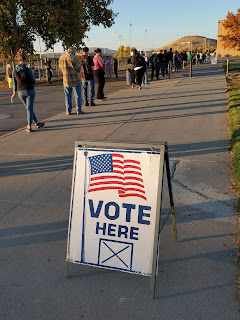 I was there the day democracy survived, one week and 10,000 refresh-browser-checking-election-returns ago. I patrolled the hundred-foot zone. I held the line. I chased down people who cast provisional ballots. I reported wait times every hour. I bore witness. Every vote counted.

We learned this 20 years ago, when 537 people out of 282 million Americans decided our fate. We need poll observers for democracy to work. Someone has to be there to protect the vote. That someone is me, and thousands like me, standing vigil, to prevent people from being prevented from being counted.

So, all day I counted at Reed High School, in Sparks, Nevada – the busiest polling place in Washoe County, the swing county in a swing state.

6:30 a.m. The air was on the cusp of freezing, and I was already pacing purposefully as dozens in Covid masks were lining up, socially distanced.

I walked up and down the line to keep warm, yes, to work off nerves, too, but mostly to see everything, let nothing escape. I took note of where the 100-foot line was, the zone within which electioneering was prohibited.

8:11 a.m. Police car parked toward the end of the line. No idea why. 8:13 a.m. Apparently he works patrolling the school.  8:14 a.m. The two police officers came in and checked in with Kim the polling site manager, introduced themselves and gave her a card with their names and a number to call if she needed anything. 8:28 a.m. Police car staying parked out front. No one seems intimidated, but it is worth noting.

9:42 a.m. What’s the deal with the Fox News cameraman taking footage of voters voting? He literally has his camera pointing at the visible screen of a voter! That’s not ok, speak to the poll manager.

10:20 a.m. Still 110 people in line. We got the registrar of voters to send help to open extra voting stations. Hope they help.

12:51 p.m. 40-minute wait to vote – still long, but not for lack of effort by the polling location staff, who seem to be working without breaks, everyone in masks or face shields. Their efforts are heroic.

12:52 a.m. They are getting another table with a registration machine and a trained person to do intake. There are numerous voting machines available at any one time, but the bottleneck is with processing people so they can go vote.

1:30 p.m. There have been several people decked out in Trump gear who argue with the poll manager when asked to take off their walking billboards within the 100-foot zone. One lady in a Trump hat, shirt, keychain, and mask is shouting at the poll manager, claiming that she took a poll observer course and knows her constitutional rights. (Paul, one of the election workers, comments – “Hmm, I wonder which poll observer course that was…”). Ultimately, the voter complies. She knew she was breaking the rule and decided to test it – she had an extra mask and extra shirt at the ready.

The rule is applied consistently. A young man from “Vote Tripling” – part of Rock the Vote – says he should be allowed within the 100-foot zone because he is “non-partisan.” He backs up across the 100-foot line when the poll manager says, “Do me a favor, just move beyond the zone.” He stands just beyond the marker and thanks people for voting, asking them to commit to finding two others to vote today.

2:49 p.m. The wait is like 40 minutes, which is frustrating because there are a ton of empty machines and a long line waiting outside. They could use 3 more people to do intake.

3:13 p.m. There was an observer who said he was there “for the Trump administration,” who made one of the Democratic volunteers uncomfortable by being “pretty agro.”

3:15 p.m. There are Trump SUVs honking through the parking lot – but not within the 100-foot zone.

3:19 p.m. News cameras are pointing at people while they are waiting in line – they can do that as long as they’re not filming over someone’s shoulder while they vote.

3:56 p.m. The poll boss is currently telling people to go to Sky Ranch, a middle school polling location less than 10 minutes away with no waiting. No one budges.

4:29 p.m. Yes, the good news is voters are staying calm and sticking around, so far. Kim (the boss) is really, really good.

4:38 p.m. It is still an hour-long experience to vote. Despite the discomfort, people are enduring it to exercise their franchise.

A poll worker went to voters with canes or walkers or wheelchairs to give them special fast passes to the front of the line. As it was growing dark outside, one man over 80 with a walker said proudly he preferred to wait, just like everyone else. He was chatting with his "voting buddy," a young woman he had met in line who said she would make sure he made it in and out of the poll ok.

In the line, there are groups of co-workers from construction sites and EMTs, first-time voters taking selfies, white working-class folks, Mexican families, African-American couples, geeks, hipsters, and rockers – there are, in short, every type of American. In the end, Washoe County voted 50.9% Biden to 46.2% Trump –the nation voted 50.7% Biden to 47.6% Trump. What I saw at Reed High School mirrors what happened in America last Tuesday.

There were four other Democratic volunteers through the day.  There were too many volunteers to count, from “Election Protection – 866-Our-Vote” (sponsored by Common Cause and other non-profits) – they were giving out snacks. One woman from the group was there for over 13 hours, like my wife and me. Like me, she scarcely sat down. I told her I had never seen so many people just waiting to vote and she confessed she had never seen people vote at all- she must have been 19 or 20 years old. There were workers and a food truck from “Pizza to the Polls,” keeping the long line well-fed. Late in the day, more volunteers arrived to help, from Unite Here, a union organization. And, of course, there were always several Republican poll observers.

One woman who was our "rover" stopping by from the Democratic party to check in through the day, eventually decided to stay with us at around 5 p.m., and she was the last one to leave, after every vote had been counted, hours after the poll had closed – 1,503 votes in all at Reed High School. I knew her maybe 10 years ago as opposing counsel on a case- she is a career employment defense lawyer. It was good to be on the same side now.

This voter protection army should have been there in 2000 when thousands of blacks without criminal records were turned away from the polls in Florida as ex-felons, when hundreds of Palm Beach Jewish grandparents were confused by the ballot into punching their votes for a known anti-Semite who otherwise got about one quarter of one percent of the vote in Florida (Buchanan – remember him?). We should have known that where the candidate's brother was the state 's governor, we needed eyes on the polls. We could have made sure every vote counted, if we were there, long before it got to the partisan Supreme Court, with members appointed by the president-elect's father sealing his victory. So that is what we were doing one week ago, on November 3, 2020.

Not another travesty. Whoever wins will have to have the most votes, when every vote is counted. They can't steal it if we are there watching, documenting, reporting. Their scowls won't intimidate us. We are an army dedicated to saving democracy. One person, one vote, from the President to the pauper, everyone.

Well, almost everyone. William could not vote. A 19 year-old black man, a U.S. Army reservist, he wanted to cast his first presidential ballot. He was visiting a friend in Reno the last 12 days. His driver's license was issued in Las Vegas. The on-line voting site is only for active duty military and the disabled. He is not disabled – he is fit, on stand-by to fight for America. But he is not a "full-time" soldier. An hour of calls with hotlines, reading the Veterans Administration website and checking Black's Law dictionary - an active reservist probably cannot say he's “active duty.” Sorry, William. Thank you for your service but you cannot vote and be counted today.

“William – get down to Vegas now!” I say, only half joking. “Such a shame to miss this important election. Next time please make it easier on yourself and request an absentee or electronic ballot in advance! …. Speaking of military – think of all the brave soldiers – like you – who have fought to give us this birthright of democracy – where people like us have the power to make changes.” William says, “Your encouragement through pathos has truly inspired me. Bryan, thank you so much for being an amazing human.”

Today, as I celebrate democracy, that we managed to prevail in the nation’s 25th closest presidential election (2016 was the 13th closest), by making sure all the votes were counted, I end with a bittersweet note. Tomorrow, on Veterans Day, I will be thinking of William and others who have fought to give us the right to choose our leaders – and will be thinking of those whose votes have not been counted, and of those ominous forces who would seek to rule over us, even without the votes.

I know, first hand, that nobody stole anything in this election. But, Trump is trying, now. Because of what we did, bearing witness, and what Americans did, having faith in democracy, standing for millions of hours, making innumerable special trips to the post office or ballot drop-offs, all across the country, thousands of people counting ballots through the night from Atlanta to Philadelphia, Phoenix to Detroit, Madison to Sparks, Trump will fail, again, just as he failed the last four years to kill what makes us Americans. “We the People,” as President-elect Joe Biden reminded us, will always prevail.