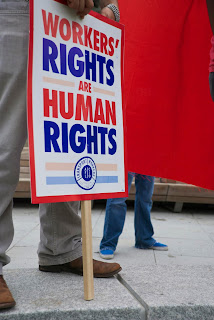 With its decision yesterday in Janus v. American Federation of State, County, and Municipal Employees, Council 31, No. 16-1466 (U.S. June 27, 2018), the U.S. Supreme Court marches forward in its sweeping campaign to erode workers’ rights to engage in protected concerted activity. See, e.g., Epic Systems Corp. v. Lewis, 584 U.S. ___ (2018) (holding that an arbitration agreement can bind an employee to individual arbitration and thereby prevent that worker from participating in class or collective action) (read our analysis of the decision here). In a 5-4 opinion, authored by Justice Alito, with Justice Kagan dissenting (joined by Justices Ginsburg, Breyer, and Sotomayor), the Court held that state government workers who choose not to join a union do not have to pay a share of union dues for covering the cost of negotiating and administering collective bargaining agreements. The Court’s decision overrules its long-standing precedent in Abood v. Detroit Board of Education, 431 U.S. 209 (1977), which required non-union employees to pay a portion of union dues, known as “agency fees,” to cover the out-of-pocket costs of collective bargaining and prevent “free riders” (i.e., workers who get the benefits of a union contract, like higher wages, better healthcare insurance, and competitive retirement plans without paying for it). Such mandatory agency fees do not fund any type of political campaigning by the union.

In Janus, the Supreme Court found that an Illinois law, which required public employees benefiting from union-organized collective bargaining agreements, to pay agency fees violated non-members’ free speech rights. Janus, No. 16-1466, at *1. The Court majority held that unions, in their “political and ideological projects” (including negotiating for better working conditions) may come at odds with a worker’s beliefs, and thereby violate a worker’s First Amendment rights. Id. The majority reasoned that requiring public employees to pay union dues would be “compelling” the worker to “subsidize” the speech of other private third party in violation of First Amendment. Id. at *9.

Justice Kagan, joined by the three other dissenting Justices, eloquently spoke to the majority’s radical departure from the Court’s established precedent:

There is no sugarcoating today’s opinion. The majority overthrows a decision entrenched in this Nation’s law—and in its economic life—for over 40 years. As a result, it prevents the American people, acting through their state and local officials, from making important choices about workplace governance. And it does so by weaponizing the First Amendment, in a way that unleashes judges, now and in the future, to intervene in economic and regulatory policy.

Departures from stare decisis are supposed to be “exceptional action[s]” demanding “special justification,” (citation omitted)—but the majority offers nothing like that here. In contrast to the vigor of its attack on Abood, the majority’s discussion of stare decisis barely limps to the finish line. And no wonder: The standard factors this Court considers when deciding to overrule a decision all cut one way. Abood’s legal underpinnings have not eroded over time: Abood is now, as it was when issued, consistent with this Court’s First Amendment law. Abood provided a workable standard for courts to apply. And Abood has generated enormous reliance interests. The majority has overruled Abood for no exceptional or special reason, but because it never liked the decision. It has overruled Abood because it wanted to. Id. at **26-27.

The First Amendment in 1977 was the same as it is today, and yet, the Supreme Court again tramples on long-established American public policy favoring workplace peace and shared prosperity through collective bargaining between labor and management—one of few remaining mechanisms for workers to stand toe-to-toe with employers. The Court, despite its “pull-your-boots-up” philosophy, now gives “free-riders” the right to reap the fruits of hard-fought collective bargaining without chipping in anything.

Even conservative legal experts like Eugene Volokh agree that the majority’s opinion fails to reckon with the many ways in which “the First Amendment ‘simply do[es] not guarantee that one’s hard-earned dollars will never be spent on speech one disapproves of.’” Dissent at p. 15; Eugene Volokh, Why There’s No First Amendment Problem With Compulsory Union Agency Fees, (published Jan. 29, 2018), available at: https://reason.com/volokh/2018/01/19/why-theres-no-first-amendment-problem-wi. Were it otherwise, the Court would be compelled to upend many other well-entrenched arrangements where the government requires mandatory fees to subsidize various activities it believes serve an important governmental interest but which individuals may oppose, such as mandatory bar dues for attorneys, certain administrative fees for public university students, and, more generally, taxes spent on controversial governmental activities.

The Janus opinion is another example of the Roberts Court “turning the First Amendment into a sword, and using it against workaday economic and regulatory policy.” Slip. Op., Dissent at 27. Working people should remember this decision as they head to the ballot box this November.