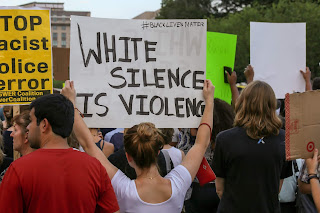 The lasting power of white supremacy is once again on full display. All of us – especially those benefiting from a legacy of white privilege – have an obligation to end this reign of terror. As civil rights lawyers, we at Bryan Schwartz Law feel a special duty to respond.

Our work as lawyers hinges on a core belief in the rule of law and the power of the law to organize society in a way that protects and provides for its people. The events of the past weeks are a painful reminder that the rule of law is not evenly applied. Yesterday, the president ordered police to tear gas protestors at the White House so that he could get a photo holding a bible in front of a church (whose bishop, by the way, was not warned of nor condoned his visit). When police and other government actors contribute to the abrogation of vital protections (like our First Amendment freedoms of speech, association, and assembly, and anti-discrimination laws) or selectively enforce laws as a way to subjugate people, we as lawyers have an obligation to step in and push our legal system to correct course.

That includes intervening in every sphere of life where white supremacy is present, including employment. While California is home to some of the most progressive employment laws in the nation, there is also a seemingly endless stream of cases of Black employees being denigrated and abused in the workplace, one of which is our class-action race discrimination and harassment case against Tesla.

When clients first come to us, their faith in the law has generally been shaken. They have been wronged; their rights have been violated. It is a special duty and honor to be able to say, we hear you, we are with you, we will stand beside you, and we will fight for you.

And so today we say: Black Lives Matter and fight white supremacy. The struggle for racial justice is real and it is long. We will continue to lend our talents and treasures to the struggle to defeat racism in all its forms.